• What does Siddha Vasi Therapy treat

The ancient Siddhas, hailing from South India (present-day state of Tamil Nadu), were typically scientists, healers, alchemists, and sages all in one. They developed a vast knowledge system (the Siddha system) with various branches of knowledge such as Siddha Medicine, science of Varma (vital point therapy), Siddha Alchemy, Siddha Yoga and Siddha Tantra.
The traditional Tamil Siddha system has existed since time immemorial. It is one of the oldest systems to describe health as a holistic perfected state of the physical, psychological, social and spiritual components of a human being.
Although there are many Siddhas in the Siddha Tradition, a group comprising of 18 ancient Siddhas are considered significant and are called the “18 Primal Siddhas”. One of the 18 primal Siddhas is the great Siddha Agasthiyar, who is the Father of Siddha medicine, Tamil literature and grammar.

Siddha Pal Pandian, residing in Tamil Nadu, South India, has immersed himself in the Siddha tradition for most of his life. Pal Pandian gave up college education and chose to turn toward the Siddhas living in mountains and caves. He wandered for two years, meeting many teachers and hidden masters until he met his own. The next twelve years he spent under the immediate guidance of his own Siddha Master hailing from an ancient oral lineage, learning the various dimensions of this pre-vedic tradition.
According to his Guru's instructions, he spent the next 16 years as a native Siddha healer offering free healing and medicines. Presently, he is involved in teaching, guiding and spreading of the oral teachings of his Guru lineage.

Pal Pandian's book ''Siddhas - Masters of Nature" gives an overview of the entire Siddha tradition and its most vital dimensions, such as healing and medicine, alchemy, science of Varma, Siddha yoga, Siddha tantra etc. The book also includes ancient cryptic poems of the twilight language translated into English.
Through Siddhas - Masters of Nature, Pal Pandian speaks of events, encounters, oral teachings and insights, received while in the vicinity of his Siddha masters.

The book is available on most of Amazon's international websites. 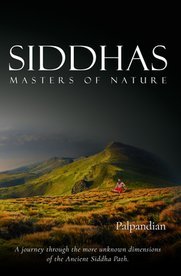